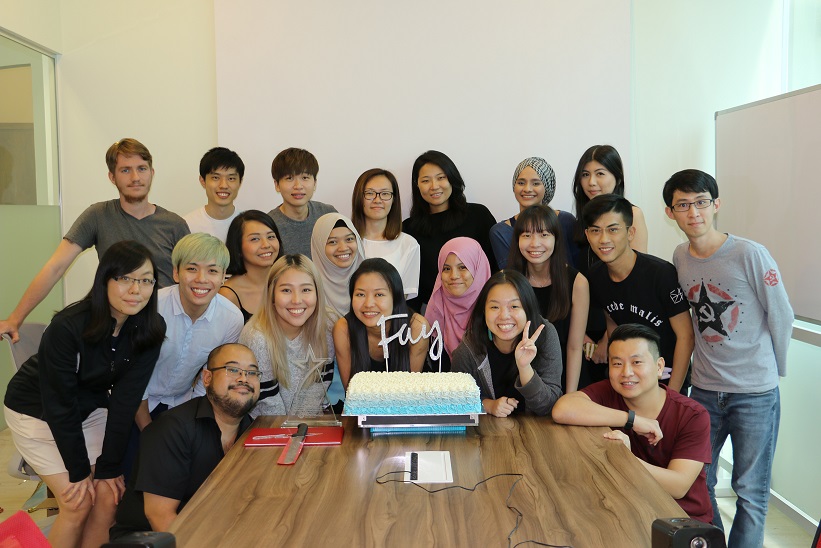 This post will be a bittersweet one, as we’re bidding farewell to one of our oldest (in terms of service at SV—definitely not age!) and most beloved members.

Fay has been part of the SV family since the very beginning, and SV couldn’t have grown so steadily without her monumental role in handling every aspect of each project. From the start to the finish, Fay has been the one with the big picture in mind, always keeping things on time and miraculously turning mishaps into outcomes even better than originally planned!

We started planning her farewell party about a week in advance, stealthily alt-tabbing party-related chat windows whenever she walks past, or swiftly (more like abruptly and awkwardly) changing topics at the pantry when she appears to refill her bottle. It’s been a week of carefully strategized tribute filming, often after she’s gone out for lunch, or after work when our videographer Shi Hai has to stay back and work his magic. These are the least we could do after Fay’s constant guidance and the laughter we’ve all shared.

The surprise, as usual, was a near-disaster, even after three haphazard trial runs.

As you can see, the first person’s (Rachel) popper didn’t go off. Then the popper that actually went off shocked us all so much with its loudness! Apparently it’s supposed to be projected at a distance of 4 to 6 meters…oops. We were also supposed to steer Fay towards the conference room, but somehow she managed to slip past us and almost went back to her own desk!

Most of us were just laughing too hard to function—nothing surprising there! *Shrugs*

The tribute video was made in a glamorous Star Awards fashion, which was funny at first but as the individual messages began, the atmosphere took on an emotional tinge. Thank goodness for the cake that became the hot topic as it bore an uncanny resemblance to one of our marketing gurus’ shirt!!

We must have laughed about the cake and shirt for at least 15 minutes, to Daniel’s chagrin. Oh well, if you wanna wear a cake, you gotta be game for people to laugh.

It’s been a great journey, and Success Vantage wishes Fay all the best in her future endeavors.