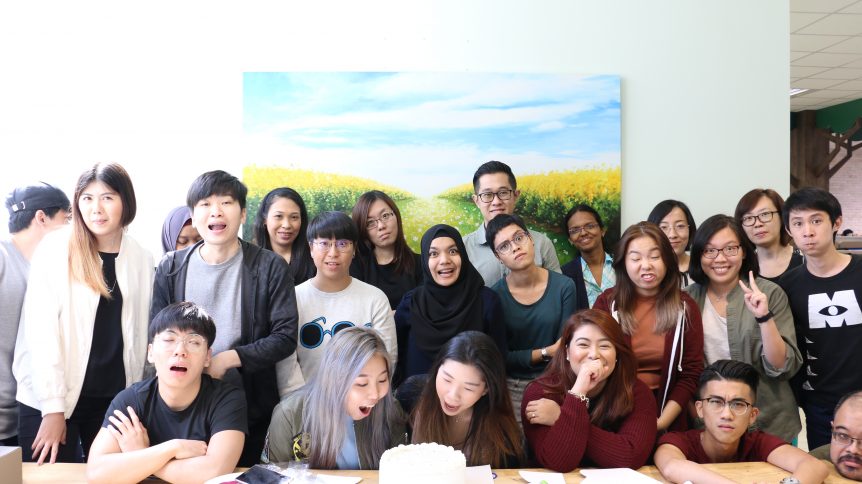 April is the fourth month in our modern calendar, but did you know that around 700BC, April was the second month of the Roman calendar year? The word april is derived from the Latin word aprilis, which means “second/latter”.

This month, there’s not only April Fool’s Day, but also the birthdays of 2 SV members – Jiayu and Xiu Zhen! The latter was away on leave though, so here’s a pretty picture of Jiayu for you! 😛

The cake got everyone’s attention, partly because of its size (it’s humongous!) and flavor – it’s ondeh-ondeh! If you’re not familiar with ondeh-ondeh, it’s a traditional sweet commonly found in Southeast Asia. Little balls of glutinous rice are filled with gula melaka (palm sugar) and covered in grated coconut flakes.

With the appearance of this cake, a mini debate about how to pronounce it ensued. Is it ‘on-day on-day’ or ‘on-nay on-nay’? For the record, it’s neither. It’s actually pronounced as ‘own-day own-day’. Yes, like the popular spectacles chain store found in many of our local malls. We checked this with our Malay colleagues so it should be quite accurate. 😃

Inspired by this old-school dessert, this ondeh-ondeh cake has 3 layers of pandan sponge caked glued together with gula melaka. Covered in freshly whipped cream with a generous shaving of coconut flakes on top, it’s everyone’s idea of a delicious cake. The moist sponge cake layers is a good contrast to the crunchy bits of gula melaka while the salty bits of coconut flakes balances out the sweetness of the cake. Mmm, yummy! (I’m getting hungry just writing about it…Maybe I’ll get another slice…)